From the Holy Mountain

In the spring of 587 AD, two monks set off on an extraordinary journey that would take them in an arc across the entire Byzantine world, from the shores of the Bosphorus to the sand dunes of Egypt. On the way John Moschos and his pupil Sophronius the Sophist stayed in caves, monasteries and remote hermitages, collecting the wisdom of the stylites and the desert fathers before their world shattered under the great eruption of Islam. More than a thousand years later, using Moschos’s writings as his guide, William Dalrymple set off to retrace their footsteps. Despite centuries of isolation, a surprising number of the monasteries and churches visited by the two monks still survive today, surrounded by often hostile populations. Dalrymple’s pilgrimage took him through a bloody civil war in eastern Turkey, the ruins of Beirut, the vicious tensions of the West Bank and a fundamentalist uprising in southern Egypt. His book is an elegy to the slowly dying civilisation of Eastern Christianity and the peoples that have kept its flame alive. 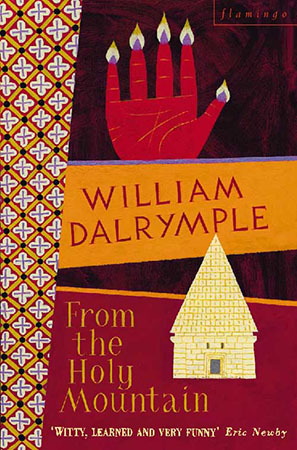 Peter Levi
“Any travel writer who is so good at his job as to be brilliant, applauded, loved and needed has to have an unusual list of qualities, and William Dalrymple has them all in aces. Dalrymple’s ear for conversation is as good as Alan Bennett’s. The best and most unexpected book I have read since I forget when.”
John Julius Norwich, Observer
“Nobody but William Dalrymple – and possibly Patrick Leigh Fermor – could have produced so compulsively readable a book.”
Sara Wheeler, Independent
“A rich stew of history and travel narrative spiced with anecdote, opinion and bon mots … The future of travel literature lies in the hands of gifted authors like Dalrymple who shine their torches into the shadowy hinterland of the human story – the most foreign territory of all.”
Edward Marriott, The Times
“Compelling reading … Dalrymple’s eye for the revealing moment is as acute as ever. From the Holy Mountain is rare indeed: a book that will endure.”
Anthony Sattin, Sunday Times
“Dalrymple stands out as one of our most talented travel writers. Energetic, thoughtful, curious and courageous.”
Alan Taylor, Scotsman
“Dalrymple’s threnody for Eastern Christianity ranks with the great modern travel books, Robert Byron’s Road to Oxiana, Patrick Leigh Fermor’s Time of Gifts and Eric Newby’s Short Walk in the Hindu Kush.”

From the Holy Mountain elsewhere on the web: